Awhile ago, Australia launched a fabulous tourism campaign asking travelers and adventures to apply for The Best Job in the World! Not only did many people apply for the job, but millions around the world kept up with the campaign and many of us saw plugs on social media to vote for someone’s friend who was sending in his/her video for the post.Their pitch: “Ever dreamt of waking up on an island, surrounded by pristine beaches and an abundance of wildlife? Or spending your days swimming with dolphins and sea lions? If this sounds like your ideal role, then we want to hear from you!” The winner of South Australia’s Best Job in the World competition for the title of Wildlife Caretaker went to Greg Snell. As his time as Wildlife Caretaker comes to an end, Greg shares his story and the imagination and education he believes travel provides. 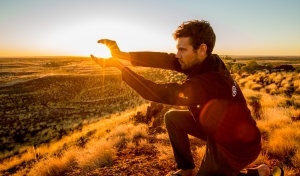 Winner of ‘The Best Job in the World’ Competition: Wildlife Caretaker-South Australia

END_OF_DOCUMENT_TOKEN_TO_BE_REPLACED 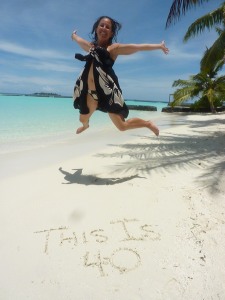 Turning 40 on the Indian Ocean

I can’t believe it…I’m 40. My mom used to say that she couldn’t see what her life would be like past 25. And now, I’m 40. I can remember the excitement of 13, 18 and 21, the tears at 20 when I was no longer a teenager and the freak-outs that came with the realization that I was 30-how old! And now this? Strange though it may seem, I’m not as concerned as I was at 20 or 30. Now, I feel lucky…lucky to have made it to this time in my life and finally, actually able to feel comfortable in my own skin. But let’s face it, to the majority of the population with whom I’ve spent my life working…I’m old! I know, I know, 40 is the new 30, right? Now I look at the 70-year old couple holding hands on the boardwalk and smile hoping that I get to experience that one day. And I sit in amazement at the grandparents I know who are enjoying life at the age of 100. Truly, age is really just a number. I think this is the first birthday that made me start to think about that. Reflective and happy…..this is a special year and I’m so very excited to be spending it enjoying white sand, crystal clear blue of the Indian Ocean and paradise in a beach bungalow in the Maldives! END_OF_DOCUMENT_TOKEN_TO_BE_REPLACED

The travel community is filled with incredibly interesting people. All are dreamers and doers who find a way to include travel as a focal point in their lives. If you’ve ever thought about living, working, continuous travel and education with your family in tow – meet John, Nancy, Davy and Daryl of Family on Bikes. John and Nancy are teachers by trade and adventurers at heart. They’ve lived and worked all over the world and have helped their children learn with the world as their teacher. Raising their family in the global classroom community as well as the traditional one, here they share their story, inspiration and ideals of adventure. 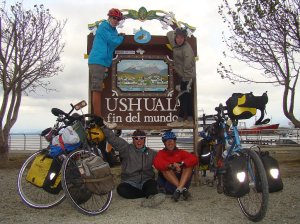 Riding bicycles from Alaska to Argentina

1.When did you get started traveling? My life of travel started way back in 1976, when my parents took us kids to Mexico for Christmas vacation. I remember walking down the Mexican streets in wide-eyed amazement – it had never occurred to me that people actually lived differently than I did in Boise, Idaho. When we arrived back home, I turned on the television and a commercial for the Peace Corps came on. I made the decision right then and there that I would join the Peace Corps as soon as I could. I haven’t stopped traveling since. END_OF_DOCUMENT_TOKEN_TO_BE_REPLACED

The travel community is filled with incredibly interesting people. All are dreamers, doers, travelers and some make it their business to be a constant source of good and change in the world. Elana and I met after Hurricane Sandy. We were connected through a new not for profit, Race2Rebuild founded by our mutual friend after the hurricane. We met and connected through volunteer work, disaster relief and a joint sense of adventure. Like many of the fabulous disaster relief personnel that we have been honoured to meet and work with, Mat and I believe Elana is a super hero. She may not see the cape she wears, but we do. She has had her share of ‘travel’ and shares what she believes to be some of its many gifts. Without question, she has brought her gift to thousands. Thanks, Lana. 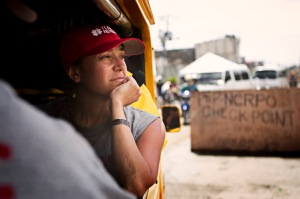 1.What/when was the first disaster to which you had to ‘travel’? With which organization were you traveling with on the mission? (ie; FEMA, Homeland Security, Team Rubicon) The answer to the first disaster to which I had to travel really depends on the definition of disaster, and I suppose on the definition of travel. With the Army, I saw Afghanistan and Iraq, Qatar and Romania, Germany and Hawaii. I lived in Europe and spent every long weekend knocking another country off the list. Upon leaving the service, two itches still needed to be scratched: the insatiable need to continue service and the bite of the travel bug. With Team Rubicon I found an ointment for both, and the disaster response travel began. After several months of local travel to cut downed trees, clear debris, and hang sheetrock in nearby northeastern states, I journeyed to Moore, Oklahoma in June 2013 after two subsequent F5 tornadoes hit the town leveling entire neighborhoods.

END_OF_DOCUMENT_TOKEN_TO_BE_REPLACED

RSS Links to The Gift of Travel

lessons, joys and laughs in baby making, motherhood and life...

the world is our playground

Everything about travel rewards programs and better travel.

Education and Adventure for Everyone

The incredibly true misadventures of a home gardener.